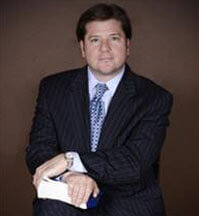 Attorney Todd A. Walters grew up on the East Coast in New Jersey. He attended Ithaca College in upstate New York, where he majored in Psychology with a concentration in English. He attended the Thomas M. Cooley Law School in Michigan where he was honored on the Dean’s List, and where he represented clients in the renowned Sixty-Plus Elder-Law Clinic. Additionally, Mr. Walters worked as a Law Clerk in the United States Attorney General’s Office at the Department of Justice in Grand Rapids, Michigan. There, he did extensive legal research and wrote appellate briefs, one of which was pivotal in making new law with Federal Sentencing Guidelines.

Following law school Mr. Walters moved to Chicago where he developed his extensive litigation and trial skills as the Senior Associate at a law firm that focused exclusively in divorce, custody and family law matters. In August 2009, in an effort to bring his clients a more personalized and attentive approach to their family law matters, the doors to The Walters Law Group, Ltd., were opened.

Mr. Walters is well respected by judges and his courtroom opponents. He was selected as an Illinois Super Lawyer in 2005, 2006 and 2007, and is active in his local community of Palos Park which is in the southwest suburbs of Chicago. Mr. Walters has been lead counsel on a number of high-profile divorce and family law cases, while being sensitive in protecting his clients’ rights to privacy.

Chicago Office (by appointment only)

Attorney Todd A. Walters grew up on the East Coast in New Jersey. He attended Ithaca College in upstate New York...

After receiving her undergraduate degree at the University of Wisconsin—Madison in 1989, Nicole began her...