A divorce is never a part of an ideal circumstance. It is, in fact, the opposite. The effects of a divorce and child custody fight can leave you reeling under stress and financial strains for a long time. This bitter battle is even harder on the children, if they’re involved.

While child custody isn’t complicated in itself, what can be immensely excruciating is dealing with the emotionally-charged vibes between the spouses, which can take a turn for the worse and leave an overwhelming impact on the children whose destinies are on the line. 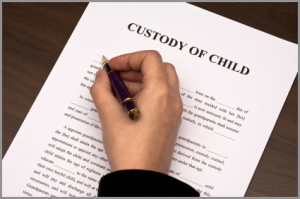 The term ‘custody’ tends to inspire conflict between parents because both want to win it. The race to stay ahead can create an unhealthy competition between the couple.

However, it need not be that way. More than anything else, children need loving and nurturing relationships with both parents. This is only possible when both spouses work together towards creating a secure environment for their children.

Many a times, custody battles for children can give rise to extreme tension between the couple, which often results in losing sight of what’s best for the children. In this post, we tell you a few tidbits you need to know when negotiating for child custody.

What a Custody Battle Entails

Couples bring children into to the world hoping to raise them together. So that makes the whole concept of “winning” the custody a highly controversial one. Both, the parents and the children end up losing something that they once held very closely – togetherness.

A legal procedure needs to be followed wherein the judge decides what is best for the kids. So a parent, who has always been there for his/her children and supported them, may end up losing custody simply because the judge may pass a ruling in the favor of the other parent, considering it to be in the kids’ best interests.

You may also want to know that only the judge has the authority to make decisions on the custody arrangements. Neither parent can bind the court or any of the children on these arrangements at any time in the future.

So if you and your spouse have made specific plans about where your children living with the other parent until you’ve got yourself that Master’s degree you’ve been working towards, and then live with you, you can consider them null and void. The judge may just rule that it is in the best interest of the children not to force them to go through another big change to moving to your place.

When it comes to the welfare of children, almost all states have a conjecture in favor of the status quo. This means that before the judge enforces any kind of change in the children’s life, he will have to be persuaded that either their current living situation is unsuitable for their wellbeing, or bring to his notice something about staying with you that will dramatically improve their life after the change.

Without proving either of the two options, the chances of the judge making any change in the present arrangement would be meagre.

If you’re considering hiring legal help, you will do well to hire an attorney who specializes in child custody cases. Ideally, you should engage the services of an experienced lawyer from your area (the laws vary from state to state), one with a high success rate in difficult, antagonistic divorce cases, especially those involving custody. If you’re a resident of Chicago, for example, look for a child custody attorney in Chicago to help you with your case.

If, on the other hand, you and your spouse are working towards reaching an amicable agreement for raising your children (which means you’re more concerned with good parenting), you’ll be better off with a knowledgeable advisor who can represent you in court. He will also be able to help you deal with certain issues you’ll likely face during and after the divorce process.

It is extremely important that you work out all the costs involved in the custody battle with your attorney. This should be done well in advance so that you do not end up crossing your financial boundaries. Keep tabs on how much you’re spending on your legal bills.

You could ask your attorney to let you know about the expenses each month so that you can keep a track of how much of the paid retainer is unspent, which major expenses you’re likely to incur in the future, and how much your attorney estimates you will be spending on the case.

Whatever you do, do not become one of those parents who go around telling the world how focused they are on what’s best for their children. Many a time, parents in the midst of a divorce get too preoccupied with trying to win custody and the struggle involved, that they lose sight of what’s best for the children.

Several parents, however, do realize that not fighting over the children is the best thing for them. They respect the fact that children are not weapons to be used against each other, or to decide the various terms and conditions of the divorce and custody battle.

Negotiate with a Composed Mind

The entire custody process can seem like really long if you and your partner aren’t able to work things out together. Needless to say, it could be particularly hard on your children.

A few crucial points of negotiations that you will have to mull over with your ex are:

It is important for both parents to be calm and composed at the time of negotiating your children’s custody and visitation arrangements. This will prove to your kids that, at the end of the day, you have been good parents, and will cooperate with one another even after the divorce.

A divorce can be extremely stressful not only for the couple involved, but also for their loved ones, especially the children. Contrary to popular belief, child custody battles need not be distressing. As long as you have your child’s wellbeing in mind, you should be able to act like a responsible parent. Hiring an attorney is a great way of steering through this process without being stressed out by it. Being aware of what the entire process entails, and how you need to conduct yourself throughout can be helpful in ensuring that you and your spouse can work out an arrangement that will truly be in the best interest of your child.